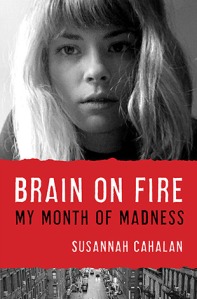 “We are, in the end, a sum of our parts, and when the body fails, all the virtues we hold dear, go with it.”

I have been blessed throughout my life with reasonably good health. It’s not a blessing I take lightly or take for granted. I have seen, especially through my parents, how quickly health can be ripped away – it only takes one small disaster. Susannah Cahalan, a young journalist for the New York Post, met such a disaster as she unexpectedly faced an onslaught of health emergencies and lost her grip on reality. Her memoir, Brain on Fire: My Month of Madness, captures the terror and helplessness of that time, even while acknowledging that she is one of the lucky ones. I found this book emotionally disturbing in all the right ways. This could easily have been me or someone I love. Her crisis came on fast, with no explanation or diagnosis for seemingly endless weeks, with little hope of remedy. Susannah went from a capable, outgoing, ambitious woman to a victim of her own body almost overnight.

“The girl in the video is a reminder about how fragile our hold on sanity and health is and how much we are at the utter whim of our Brutus bodies, which will inevitable, on day, turn on us for good. I am a prisoner, as we all are. And with that realization comes an aching sense of vulnerability.”

The above quote is as about as melodramatic as Cahalan gets as a writer. Although deemed a memoir, she definitely takes a journalist’s approach to writing, laying out the facts in a fairly bare-bones manner. Partially, this is because she has few internal memories of the events in this book. She relies on interviews and research she did later, but still tells the story as a first-person narrative. It’s a tricky balance but she does an outstanding job. Most of the book is taken up with her mysterious symptoms and quest for a diagnosis, which she feels lucky to have finally received. After diagnosis and treatment, it’s more of a reflection of how lucky she feels that she had her family to advocate on her behalf, the random interest of a top doctor, and insurance and money enough to afford treatment. (Again, these are not blessings to be taken lightly.) All together captivating and terrifying. Highly recommend. Read-alikes: The Madness of George III (the play upon which the film The Madness of King George is based) Still Alice Unless We Need to Talk About Kevin (just in the “in could be me” sense of terror)

6 thoughts on “Brain on Fire: Emotionally Disturbing in All the Right Ways”

I'd love to hear what you think. Cancel reply

There was an error retrieving images from Instagram. An attempt will be remade in a few minutes.